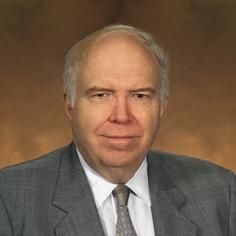 Dr. William Schneider, Jr. is a senior fellow of the Hudson Institute.  Dr. Schneider served as Under Secretary of State for Security Assistance, Science, and Technology.  He previously served as Associate Director for National Security and International Affairs at the Office of Management and Budget prior to be nominated as Under Secretary by President Ronald Reagan.

In addition, Dr. Schneider serves as an advisor to the U.S. Government in several capacities. He is currently an advisor to the Departments of Defense, Energy, and State as well as the intelligence community.  As a U.S. Senate appointee, Dr. Schneider recently served as a member of the Congressional Advisory Panel on the Governance of the Nuclear Security Enterprise.  He served as Chairman of the Defense Science Board (DSB) from 2001 to 2009 and currently serves as a member of the DSB.  Secretary of Defense Robert Gates awarded Dr. Schneider the DoD’s Medal for Distinguished Public Service in November 2009.  In 2018, Secretary of Defense James Mattis conferred the Fubini Award on Dr. Schneider for his “exemplary scientific and technical contributions” to the DoD mission. He also served on several commissions to review intelligence-related activities, including the “Rumsfeld Commission” (i.e., the Commission to Assess the Ballistic Mission Threat to the United States) on current and emerging ballistic missile threats to the United States as well as on a National Reconnaissance Office, and the Intelligence Community Strategic Studies Group under the Director of National Intelligence.  Dr. Schneider was the founder and former Chairman of the Department of State’s Defense Trade Advisory Group (1992-2018).  Previously, he served as Chairman of the General Advisory Committee on Arms Control and Disarmament from 1987 until 1993.  He serves as a member of the Board of Visitors of the University of Rochester Laboratory for Laser Energetics.  Dr. Schneider was nominated by the President and in August 2019 was confirmed by the US Senate to serve as a Member of the National Council of the National Endowment for the Humanities.

Dr. Schneider is an economist and defense analyst who formerly was a staff associate of the Subcommittees on Defense and Foreign Operations for the Committee on Appropriations of the U.S. House of Representatives as well as a consultant to the Hudson Institute.  Prior to joining the House staff, he was a Senate staff member and professional staff member of the Hudson Institute.

Dr. Schneider received his Ph.D. from New York University in 1968.  He is a member of the American Economic Association, the Council on Foreign Relations, and the International Institute for Strategic Studies.