Just as the economic impact of the pandemic varies considerably across China’s neighbors in the South China Sea, so too does their fiscal response and consequent decisions for defense spending and procurement. The relationship is not a uniform one, however, owing to differing threat perceptions and economic priorities.

Singapore, Indonesia and Brunei show the most direct correlation. Singapore, with a severe 5.4 percent economic contraction in 2020, revised the final allocation for defense in the state budget, resulting in a significant 9.5 percent cut in real terms.

Indonesia’s more mild economic contraction (minus 2.1 percent) saw defense budget growth in 2020 slow to a lower-than-planned but still sizable 14.3 percent in real terms. Meanwhile, as real gross domestic product growth stalled in Brunei in 2020, the rate of real growth in Brunei’s defense budget slowed to 15 percent compared to 24 percent in 2019. Despite an uptick in economic momentum from 2021, the country announced a significant 16 percent cut for the 2021 defense budget.

The impact on other countries is less distinct. The Philippine economy experienced a 9.5 percent contraction in real GDP in 2020, but the defense budget was held steady at 2019 levels. The economic pressure to cut spending was seemingly countered by the considerable security concerns, both internal and external, that the country faces requiring extensive counterinsurgency efforts and constant monitoring of territories in the South China Sea. Similarly, Malaysia’s decision to maintain defense spending in 2020, while in keeping with the broader stagnation seen in the country’s defense budget since 2018, came despite the 5.6 percent real contraction in GDP.

The impact on Vietnam’s economy was not as severe as for its neighbors, but real GDP growth still slowed markedly in 2020, falling to 2.9 percent compared to 7 percent in 2009. Despite this, the country boosted defense spending by 9.8 percent, well beyond the 2019 growth rate of 7.7 percent. As such, funding for defense was either ring-fenced or prioritized despite considerable economic contractions or slowdowns in these countries.

Economic outlooks in the region are positive, with most countries recovering to pre-pandemic levels of output in 2021, according to the International Monetary Fund. Official 2021 budgets propose strong increases in defense funding for Indonesia, the Philippines, Singapore and Vietnam, while Malaysia’s budget continues to hold steady in real terms. 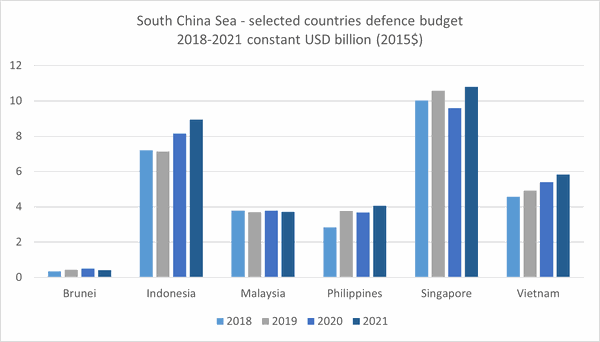 With the second-highest number of infections in South East Asia, the Philippines experienced one of the worst economic contractions in the region in 2020. Meanwhile, short-term economic projections are muted, as the country entered a steep second wave of infections in March 2021. Despite the 2020 drop in output, the Philippines managed to sustain defense spending in nominal terms at $3.7 billion, although in real terms this was a contraction of 2.4 percent as inflation reached 3.4 percent. The 2021 budget proposed a strong 15 percent nominal uplift to defense spending to $4.3 billion, a figure well beyond pre-pandemic levels and one that is approximately double the 2014 Philippine defense budget.

The disruption of the pandemic to defense procurement has been relatively limited, with Defense Secretary Delfin Lorenzana stating in May 2020 that funding of contracted program would continue to “push through.” The Philippines has been fortunate that several programs have South Korean and Israeli contractors; two countries which have had success controlling the virus. However, some modernization funding was “repurposed” to deal with COVID-19, and although the Department of National Defense is getting most of this back in 2021, some projects, such as the Navy’s corvette program, have now been pushed back to the 2023-2028 time frame.

Indonesia has the highest COVID-19 death rate in South East Asia, with a peak in cases at the end of January 2021. As a result of the evolving crisis, defense funding was revised downward several times in 2020. From a budget that would have been a 22 percent real uplift compared to 2019 levels, the final budget increase — though still sizable — was much lower at 14.3 percent in real terms, bringing spending up to $8.4 billion.

There has been some impact on procurement, most noticeably a further delay to the delivery of the country’s first locally assembled submarine, and some exports have also been affected. The proposed 2021 budget would increase spending to $9.7billion, a 15 percent nominal uplift or 10 percent in real terms. Indonesia aims to advance several planned programs across the services. Most significantly, this would include the acquisition of new fighter aircraft.

Despite the significant contraction in economic output in 2020, Malaysia implemented a 1.7 percent nominal increase for the defense budget, effectively maintaining spending in real terms, which reflects the enhanced role the military has played in pandemic-response efforts. While the 2021 budget focused on economic support and health care, defense funding was again increased by 1.8 percent in nominal terms to reach $3.9 billion. Of the procurement programs to be impacted by the pandemic, the Navy’s littoral mission ship has come off worst, with commissioning of the second vessel delayed by almost a year; the Chinese shipyard building the class is in Wuhan.

Many other programs were already significantly delayed and have likely fallen further behind. Malaysian defense spending has stagnated in real terms since 2015, which was creating pressure on defense procurement even before the pandemic. Indeed, despite the small nominal increases implemented in 2020 and 2021, spending is still close to $1 billion below 2015 levels.

Singapore initially managed to contain the virus, although an outbreak in migrant dormitories caused a spike in cases in April 2020. In light of worsening economic projections, the 2020 defense budget was revised downward significantly to $9.9 billion — 12 percent lower than 2019 levels and a 9.2 percent cut in real terms. However, the recovery to pre-pandemic levels of defense spending will be swift, as a 13 percent real uplift is planned for 2021, bringing the budget to $11.6 billion.

It is difficult to gauge the impact that the pandemic has had on local procurement, as few details are published. However, defense revenue of local company ST Engineering grew in 2020 as commercial revenue declined. Whether this is because defense programs were unaffected or because some procurement was advanced to help compensate is unclear. Imports of equipment have been impacted, however, including delays to the supply of French helicopters and German submarines.

Due to the government’s proactive and immediate response to the pandemic, Vietnam has not had to endure the kind of national lockdowns experienced by others. Because of this, Vietnam had one of the world’s strongest economic growth rates in 2020. allowing it to contract for a squadron of jet trainers in January 2021.

Efforts to grow the defense industry predate the pandemic and will now be boosted by the establishment of a new source of funding for technology development. Vietnam’s defense budget has increased every year since 2015, with real growth averaging 7.2 percent annually. Given the limited impact of the pandemic on Vietnamese economic growth, this momentum in defense spending is likely to continue as the country pursues ambitious defense-industrial goals established in Resolution No. 23-NQ /TW.

Like Vietnam, Brunei has had very few COVID-19 cases, in part because the country closed its borders early in 2020. Because of this, Brunei is one of the three countries in the region whose economy did not shrink in 2020 — the other two being China and Vietnam.

However, despite the defense budget being 20 percent bigger than it was a decade ago, the Bruneian economy has shrunk over the past 10 years, resulting in no significant defense acquisition since a Black Hawk helicopter buy in 2011. A new whitepaper, expected in May, may outline new plans.

While degrees of multinational cooperation may exist with regard to vaccines and medical supplies, the massing of Chinese fishing vessels near Whitsun Reef in late March provides a reminder that the overall security picture in the region has not changed. This, and the return to growth from 2021 onward, will likely mean that the impact of COVID-19 in the region on defense procurement and investment will mostly be a short shock followed by a reversion to long-standing trends. This trend is in contrast to that seen and expected in other regions globally, most notably in Europe, where countries continued with military financial plans in 2020 while also implementing policies designed to aid domestic defense-industrial bases that included accelerating defense procurement programs.

Growth in European defense spending is expected to reach 5.5 percent in real terms in 2021, a rate likely to be the highest globally. However, countries in Europe continue to struggle with surges in infection rates, and the vaccine roll out has faced supply and indeed demand challenges with a rise in vaccine skepticism. Countries therefore face a more acute economic outlook than those in Asia, with recoveries to pre-pandemic levels of output not likely until 2022. According to official European finance plans, the slowdown in defense spending will begin in 2023 as fiscal rules tighten and countries address burgeoning debt levels.

Tom Waldwyn is a research associate for defense procurement at the International Institute for Strategic Studies, where Fenella McGerty is a senior fellow for defense economics.